In traditional Japanese music, there are three general types of instruments - percussion instruments, stringed instruments and wind instruments, mostly flutes. There is a huge range of instruments beyond the scope of this page, ranging from bells used in Buddhist ceremonies to various kinds of drums used in gagaku (Imperial court music).

In the last few years, there have been a growing number of artists who have been bringing these instruments to younger audiences. Taiko group Kodo and young shamisen duo the Yoshida Brothers are two well-known examples of artists who give the old instruments new life and energy, and have been very successful abroad.

Below we look at the more commonly heard instruments.

There are many large Japanese drums, or taiko. Most have two membranes which are nailed or laced and are struck with sticks. The most dramatic is the Odaiko (big drum). The physical energy and sheer excitement of an Odaiko performance is an integral part of many Japanese matsuri (festivals). Perhaps because they see this all the time, most Japanese people don't get particularly excited by taiko performance groups like Kodo, while foreign audiences are enthralled by them. Each year, Kodo host Earth Celebration, a festival of taiko drumming, international music and performance art in their home base on Sado Island. Many people come to Japan from around the world to enjoy the festival and it is certainly a highlight of the Japanese cultural calendar. Kodo also tour extensively abroad every year.

The hourglass-shaped tsuzumi was introduced from the Asian continent around the 7th century and the name is derived from Sanskrit. Two varieties, the smaller kotsuzumi and the larger otsuzumi are used in both noh and kabuki performances. The kotsuzumi is held on the right shoulder and the player alters the tone by squeezing the laces. The otsuzumi is held on the left thigh. Like all other traditional arts in Japan, there are several schools of tsuzumi.

The koto is a 13-string zither, about 2 meters long and made of Paulownia wood. It is plucked using picks on the thumb and first two fingers of the right hand, while the left hand can be used to modify pitch and tone. Koto are used in an ensemble in gagaku or as a solo instrument. One of the most famous koto players and composers was the blind musician Miyagi Michio (1894-1956), who was heavily influenced by western music.

A closeup of a koto player

The Yoshida Brothers have brought a rock sensibility to the shamisen

The shamisen is a 3-string lute. It is believed to be a variant of the Okinawan sanshin. The length of the shamisen varies from 1.1 to 1.4 meters. It first became popular in the pleasure districts during the Edo Period (1600-1868) and also began to be used for the musical accompaniment in kabuki and bunraku performances. The kabuki variety developed into its own form of dance music, the nagauta or long song. Shamisen are made from one of a variety of woods such as red sandalwood and the head covered with cat or dog skin. The pegs are traditionally made of ivory while the strings are twisted silk.

Traditional shamisen playing requires the player to be quite stiff and expressionless. But young players like the Yoshida Brothers or Agatsuma Hiromitsu bring a whole new, some would say rock and roll, approach that gets young fans in a frenzy of excitement while putting their elders in a fit of anger.

The biwa is a short-necked lute, used from the 7th century in gagaku to accompany early puppet plays and also by blind monk entertainers, the Japanese equivalent of travelling minstrels. The main character in one of Japan's most famous legends, The Story of Earless Hoichi was one of these biwa hoshi (lute priests). There are many styles, the most popular being Satsuma biwa which was developed in the 16th century. The number of frets varies from 4 to 6 and strings vary in number from 3 to 5 but there are usually 4. The biwa is held almost vertical and played with a large bachi (plectrum).

The most famous flute is the shakuhachi bamboo flute. It has 4 or 5 finger holes on the front face and a thumb hole on the rear face. As with other instruments above, it was imported from China for gagaku. In medieval times, the shakuhachi became associated with wandering Buddhist priests known as komuso or 'priests of nothingness'. They played the shakuhachi as a spritual discipline and during the Edo Period they had the exclusive license to play the instrument. They are easily recognized by their straw inverted basket-like headgear. During the more progressive Meiji Period (1868-1912) various other shakuhachi schools started, some influenced by western music. 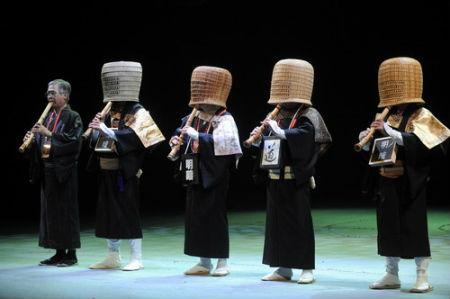 A group of shakuhachi players dressed as komuso

A flute player at a local festival

Other flutes include the nokan used in noh performances and the side-blown takebue and shinobue often heard during festivals. Kodo often incorporate flute pieces into their repertoire.