Japanese Classical Literature (up to 1868)

The oldest surviving literary works are the Kojiki (Record of Ancient Matters, c.712) and the Nihon Shoki (History Book of Ancient Japan, c.720). These works of history and mythology tell of the origins of the Japanese people and the formation of the state.

While the Nihon Shoki is written almost entirely in Chinese, the Kojiki is written in Japanese using Chinese characters and is more familiar. The great anthology known as the Man'yoshu (Collection of Ten Thousand Leaves, c.770) contains around 4,500 poems written by people from all walks of life, from emperors to peasants.

There are two main forms of poem in the anthology, long and short, of which the short form, or tanka, survives to this day. Tanka consist of five lines with 5-7-5-7-7 syllables. The foremost mood in literature of this period was personal sincerity.

The fairy tale Taketori Monogatari (The Tale of the Bamboo Cutter), written in the 9th century, is thought to be Japan's first novel. It is widely known today as Kaguya-hime (The Moon Princess) and is popular in children's picture books. It tells the tale of an old bamboo cutter who one day discovers a tiny child in a bamboo stem. He and his wife adopt her and the child grows into a beautiful woman in just a few months (just as bamboo grows phenomenally quickly). She attracts many suitors, including the emperor but sets impossible tasks for them to win her hand. Finally Kaguya-hime declares that she will return to her home - the moon. The emperor sends thousands of troops to stop her but she eludes them and leaves only a letter behind. The emperor orders the letter burned on the highest mountain in the land. Miraculously, the the letter continues producing smoke and as a result the mountain became known as Fuji, "the immortal one". 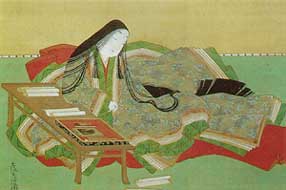 Undoubtedly the earliest great work of fiction was Genji Monogatari (The Tale of Genji) written in 1010 by Murasaki Shikibu (left), a lady of the Heian court (modern day Kyoto). It is a massive 54-volume tome that tells of the romantic adventures of noblemen, centering around the prince Genji, who has gone down in Japanese folklore as their version of Casanova or Don Juan. It also provides a glimpse into the daily life of 10th and 11th-century courtiers, as does Makura-no-soshi (The Pillow Book) by Sei Shonagon, another woman of the court.

The literature of the Heian Period (794-1185) is characterized by mono-no-aware, or a feeling of being connected to nature and all things. This concept is still considered central to the Japanese psyche though it's not so easy to see in the Japanese of today.

Five centuries of great upheaval and almost constant war followed the Battle of Dannoura in 1185, in which the ruling Taira clan was defeated by the Minamoto clan (also known as the Genji). The battle became the subject of the most famous prose piece of the time, the Heike Monogatari (The Tales of the Taira Clan, c.1220) whose author is unknown.

The mood of gloom and solitude that enveloped the country is reflected in the literature of the time. It is often described using the term yugen (mystery and depth). The most important people in Japanese society during this time, which spanned the Kamakura (1185-1333) and Muromachi (1333-1573) periods, were the samurai warriors, who lived a life of action, and the Buddhist priests, who spent their days in silent contemplation. Many of the great writers were priests.

The Shin Kokin-shu (New Collection of Ancient and Modern Poems, 1205) is one of the greatest anthologies of poetry from this period. It was compiled by the poet Fujiwara Teika but one of the major figures included is the priest Saigyo. A form of poetry developed at this time was renga, or linked poems. Three or more poets cooperated in composing one long poem. The greatest renga masters, Sogi, Shohaku, and Socho, together made up the famous Minase Sangin (Three Poets at Minase) in the late 15th century.

After peace was restored to the land under the Tokugawa shogunate, who ruled from Edo (modern day Tokyo), new forms of culture evolved as Japan was closed to the outside world for over two centuries. The Edo period (1600-1868) saw the growth of the merchant class and with it the development of an earthier kind of popular culture.

Still popular examples include kabuki, ukiyo-e (woodblock prints of actors and prostitutes) and novels like Koshoku Ichidai Otoko (Life of an Amourous Man) and Koushoku Gonin Onna (Five Women Who Loved Love) by Ihara Saisaku. These novels are bawdy tales equally about the love lives and the financial wheelings and dealings of the mercantile society. But at the same time, the Edo period also saw the development of the poetic form considered the finest achievement of Japanese literature - the haiku.

Perhaps most concisely described as the distilled essence of poetry, haiku are 17-syllable poems whose development was strongly influenced by the Zen Buddhism that was prevalent at the time. Though the current 5-7-5 syllable structure and mandatory use of a kigo ( a word to represent the season) were only introduced later in the Meiji period (1868-1912), the greatest exponent of haiku lived in the Edo period.

Basho Matsuo (1644-94) was a Zen lay priest and his haiku often form part of travel journals and were written on the road, capturing his mood and surroundings in various parts of the country as he traced the footsteps of earlier literary greats such as Saigyo and Sogi. The best known work is Oku no Hosomichi (Narrow Road Through the Deep North - it is available in the English translation Narrow Road to Oku by famous Japan scholar Donald Keene). It tells of Basho's almost 1,500 mile pilgramage with his disciple Sora from Edo to northern Japan, undertaken when he was 48 and shortly before his death. The two other great haiku poets of this period were Yosa Buson, a painter and Kobayashi Issa, a peasant villager.

The shortest poetic form in the world, haiku work better in Japanese than in English and translations are particularly difficult. Anyway, here are some translations of haiku by Basho from Oku no Hosomichi. The photo on the left shows the last haiku inscribed on a huge stone next to the Mogami River.