Thinking Of Getting Married In Japan? Two Competing Trends Offer You A Choice

The marriage rate in Japan has been declining steadily since the 1970s, but nonetheless, many couples still choose to tie the knot, and the traditional Japanese wedding still thrives. If you've met that special someone in Japan or you're thinking of traveling there especially to get married, you'll probably be aiming for a wedding that reflects Japanese culture and traditions. You might be surprised to learn that current wedding trends have Shinto and Christian ceremonies competing. 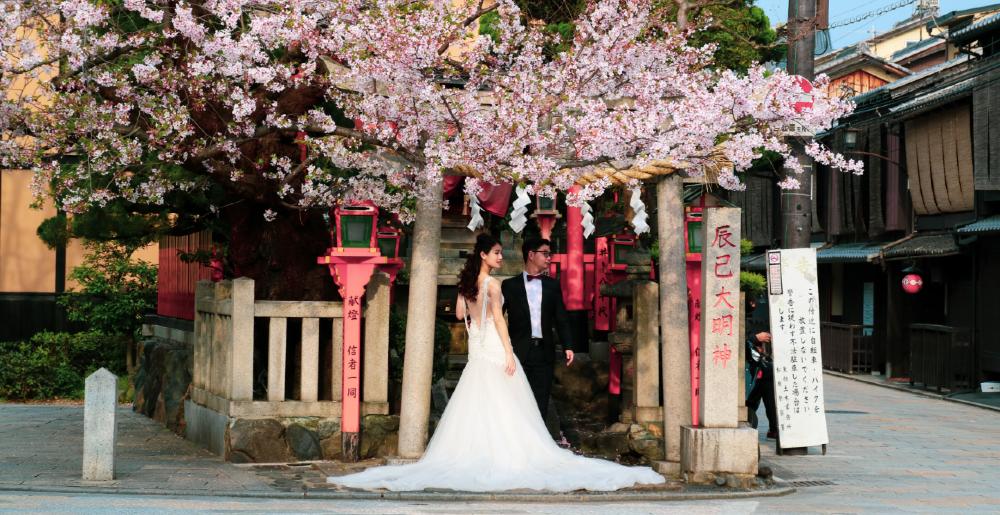 A Japanese couple in western wedding attire pose in front of a Shinto shrine.

The modernization of Japanese wedding traditions has led to the incorporation of western trends, and this extends to faith-based weddings. Many Japanese couples are opting for a Christian wedding, not because they follow the faith, but because it's fashionable. In fact, it's not unheard of for white foreign tourists to find themselves playing the role of the priest in a Japanese Christian-style wedding. It's the glamor associated with the big 'white wedding' that's attracted this surge in popularity, and the wedding of Prince Charles and Princess Diana back in the 80s did much to set the ball rolling.

If you were hoping for something a little more traditional, however, you're in luck: the traditional Shinto wedding is the second most popular ceremony in Japan at the moment. Indeed, many couples who aren't Christian but still want the Christian-style ceremony opt for two events, and also have a Shinto wedding. The ceremony is held in a shrine and performed by a Shinto priest. The happy couple usually wear traditional Japanese wedding kimono: white for the bride and black for the groom — usually with his family's crest on it.

The ceremony is usually only attended by close family, with more people invited to the reception afterwards. The priest offers prayers and the couple is purified, before the groom swears an oath to the bride. The 'san-san-kudo' is then performed, where the couple share three cups of sake, each taking three sips from three cups of differing sizes. The ceremony is concluded with symbolic offerings to the gods, and often rings are exchanged. This is a newer tradition, however, borrowed from the west.

Despite being a later addition to the traditional ceremony, the ring trend is still strong. You might want to consider your ring budget carefully though: many couples are now opting for three rings. The marriage ceremony is not legally binding, so couples often now have an engagement ring, a ring to be exchanged at the ceremony, and a ring to be exchanged when they legally register their marriage. If you're looking to fully embrace Japanese traditions when you get married, consider your budget when you're picking out the perfect proposal ring and make sure you consider what you'll need to spend on your wedding bands, too. The best way to do this is by setting up a dedicated ring account, which will help you make sure you don't put yourself out of pocket in the process. You'll also need to check the legal requirements if you're a foreign citizen: the process is easy, but you'll need the right paperwork in place.

If you're planning on getting married in Japan, you're doing so at the perfect time to embrace traditional Japanese wedding culture while still being on trend. Remember that neither Shinto nor Christian-style ceremonies are legally binding though: you'll still need to register to make your union official.